This is an essay of the writing workshop Gender and the Economy - Perspektives of Feminist Economics, published on 27 July 2017.

International mobility of labor has been a highly debated topic throughout recent decades. As the world has become more integrated and inter-connected, movement of people across borders has become easier and more prevalent. Both high-skilled and low-skilled migration has been subject of studies, in terms of the impact they have on both the source and destination economies. However, when the source country is a developing country and the destination country is developed, studies focus on different analysis. Concerning source countries, on one hand, studies focus disproportionately more on the brain-drain – the emigration of human capital from developing countries to developed countries. In destination economies, on the other hand, most studies focus on the impact of low-skilled labor in the economy – taking into consideration the fact that labor moving from developing countries into developed countries is mostly low skilled. However, there have not been many studies focusing on the phenomenon known as ‘brain waste’ – the underuse of migrant labor force that is skilled and educated.

Considering the labor market mismatch that developed countries face, economic analysis can focus on different levels. The major debate in mainstream economics on immigration is whether the migrating labor force is a substitute for, or a complement, to domestic workers. Increased labor supply, through migration, increases the demand for employment in the receiving country, thus creating higher unemployment, unless there is a demand for workers of the skillset that is supplied. In controlled migration, the level of incoming labor and the skills of the labor force are possible to be projected and estimated through policies. In times of crisis, however, when there is an influx of refugees, there is no way to ensure that the migrants’ skill-level is the one needed in the receiving country.

However, in heterodox economics, other factors are considered when assessing the impact of migration, especially in terms of the labor market. In feminist economics, one important subject of analysis is the functioning of global care chains, as one of the key elements that impact women migrants and their participation in the receiving country’s labor force.

Global care chains, in the most elementary description, as developed by Arlie Hochschild in 2000, refer to the ‘personal links between people across the globe based on the paid or unpaid work of caring’ (Hochschild, 2000). The idea of the global care chains, within feminist economics, is both important to the analysis of the valuation of care and household work, and the gendered patterns of migrant labor markets. At present, with a new wave of migration, the latter has become a more pressing issue for analysis. However, there has been limited enquiry on the impact that being part of the global care chains has on the deskilling of the migrant workforce, specifically on migrant women. While some scholars (Kofman cited in Vertovec 2002, Yates 2012) have emphasized the importance of a broader scope of analysis of global care chains, the literature, especially of the recent migrant crisis, is limited. Another important concept to understand for the purpose of this article is deskilling, which, by definition is the decrease in the quality and usage of the knowledge and skills of individuals due to lack of usage or lack of opportunities

Hochschild imagined global care chains as a series of responsibilities passed on from one woman to another. It starts with an employed woman in a developed country, who in an attempt to avoid a second shift of household and care work, hires a migrant woman coming from a less developed country to complete the expected household and care work that she is to deliver. As a result the migrant woman is now also unable to complete the expected household and care work in her own family. She then passes on these duties to another member of the family, often the older daughter. The further down the care chain, the less valued it becomes, with the last woman in the chain usually providing the care work for free (Hochschild, 2000; Yates, 2005). Hochschild’s analysis is based on the idea that the woman from the less developed country usually migrates alone, something which is not always true – often families migrate together. This view is shared by scholars who have built on Hochschild's work. Yates posits that care workers who have migrated are not necessarily mothers, or that those who are, have left their family behind. Instead, they might well  have migrated together (Yates, 2012). Parreñas also sees it as important to expand the analysis to women who are not mothers, but still have care duties within their household (Parreñas, 2001). These expansions of the analysis are important in the creation of an inclusive gender perspective in the global care chain analysis.

Source: Own elaboration based on Hochschild, 2000.

Analysis of migration from a mainstream economic perspective shows a consensus among economists that movement of labor across borders leads to higher global welfare, while the specific impacts especially on the domestic labor force of the recipient country differ and are usually considered negative. Analyzed from the specific-factors model, the impact of immigration on domestic labor force will be different based on whether the migrant labor force is a substitute or a complement to the domestic labor force (McLaren, 2012). The low skilled workers entering the economy due to humanitarian crisis will be substitutes to current low skilled workers in the economy – making the domestic skilled workers worse off. The low-skilled migrant workforce will be complements to the high skilled workforce in the economy – making the domestic high skilled workers better off. Another economic view, the Rybzynski theorem predicts that the sectors receiving migrant workers will expand, due to higher and cheaper labor force. However trade theory, operating under the assumption of homogeneous workforce and perfect substitutability, as well as being a partial-equilibrium prediction, fails to account for informal barriers to labor market integration, imperfect skill transferability, as well as the impact of labor force movement in general equilibrium (Leeson and Gochenour, 2015). In reality however, migrant workers do not provide perfect substitutes for the domestic labor force, an assumption which has been key not only to economic theory, but to empirical studies as well. Since the impact of migrant labor on domestic labor – specifically on the wages of domestic workers has been central to empirical analysis, the results have been mixed.

Constraining the analysis to global care chains, this article will look at the impact that migrant women have on the domestic female labor force, for both when there  is skill transferability and when there is not.

Chart 2. If there is skill transferability 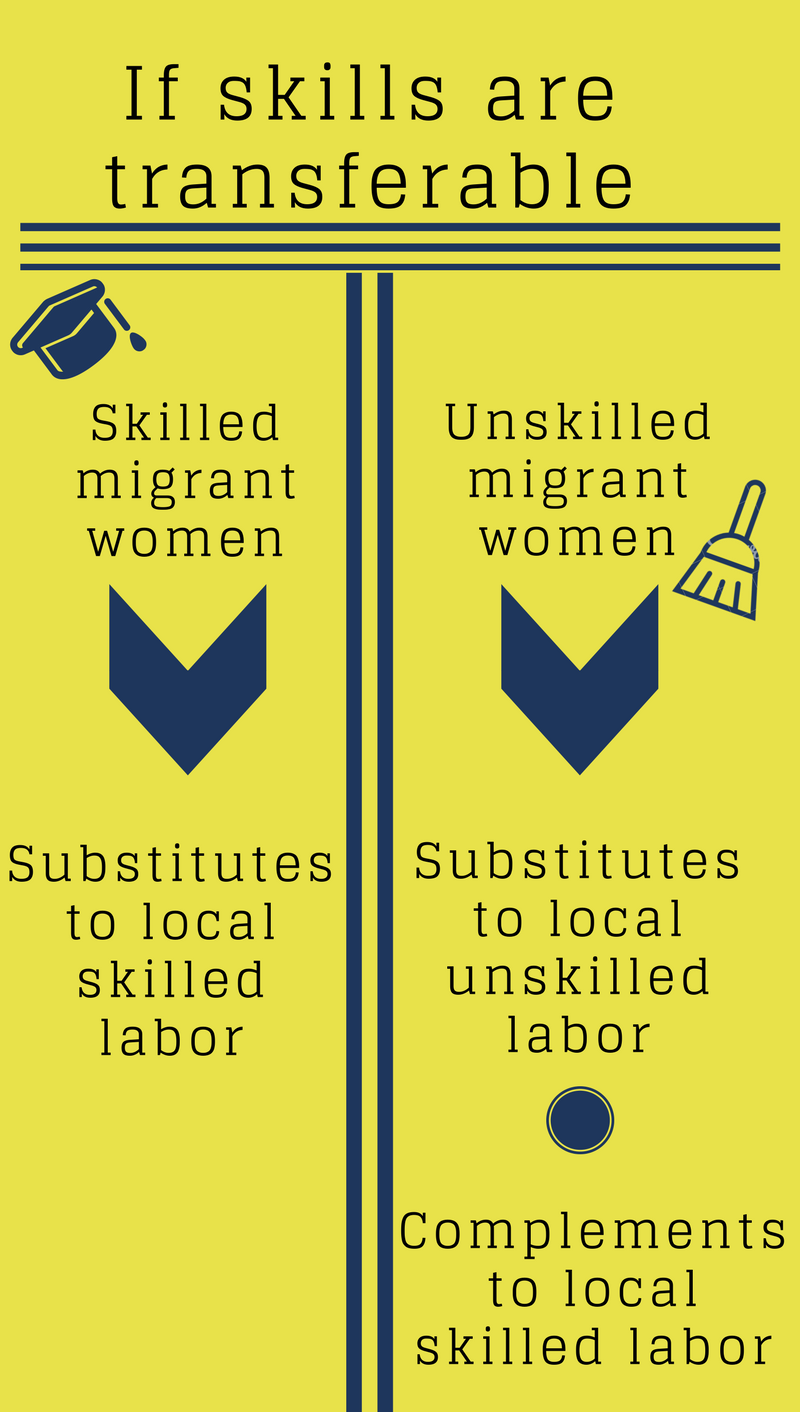 Second, more realistically, we consider the scenario where there is no or incomplete skill transferability of the migrant labor force. Studies focusing specifically on medical professionals found that there is a skill depreciation among migrant workers (Allan and Aggergaard, 2003; Raghuram and Montiel, 2003). Highly skilled and educated migrants, usually have their skill and education level impaired by their lack of language knowledge, recognition of their educational achievements, as well as cultural shocks they receive in a new country. These barriers to integration in the domestic labor market are the reasons behind skilled labor accepting jobs that devalue and depreciate their skill level. Taking this into consideration when analyzing the behaviour of women migrants in the labor force, it becomes clear that when there is no or little skill transferability, even highly skilled and educated women work in paid care work and become part of global care chains. In this case, both unskilled and skilled migrant women are substitutes to female unpaid work in the receiving country. As such, existing economic models of labor movement are rendered lacking.

Third, the involvement of skilled women migrants in work that underuses their skills and education level, results in deskilling of these women. Deskilling refers to the decrease in the quality and usage of the knowledge and skills of individuals due to lack of usage or lack of opportunities. As a result, when the receiving country simultaneously does not provide the opportunity for skill transferability, as well a need for care work, it results in skilled women undergoing a deskilling process. In this case, the existence of global care chains serves as a tool for the deskilling of migrant women.

Considering the skill composition of migrants overall, women are expected to have skill levels similar to the general population of migrants. As a result, in the most recent refugee inflow, while the barriers to skill transferability in European labor markets remain high, women becoming part of global care chains will undergo a process of deskilling, as a consequence of their migrant status. The relevance of this to feminist economics coupled with the present day importance of migration and its impact on a receiving country’s labor force provides an exciting area for further research in feminist economics. Such research serves as an important basis for consideration both in migration studies and in labor economics. Moreover, in the realm of global care chains there is room for important research with regards to families that have migrated together and the impact global care chains have on them.

Raghuram, Parvati and Montiel, Dawn (2003) Skilled migratory regimes: The case of female medical migrants in the UK. In A Montanari (ed) The New Geography of Human Mobility: Ine-quality Trends(pp 67–84): Home of Geography Publication.

This project is brought to you by the Network for Pluralist Economics (Netzwerk Plurale Ökonomik e.V.).  It is committed to diversity and independence and is dependent on donations from people like you. Regular or one-off donations would be greatly appreciated.